A detailed odor study and remedy plan was conducted for the Potomac Interceptor (PI) sanitary sewer system with a long-term goal of mitigating odor while maintaining the integrity of the concrete pipes. The odor study consisted of field data collection and odor assessments to define the scope of the odor along the PI. Several options were considered for the abatement of odors including passive controls, active (forced-air) treatment systems, and chemical additives. A combination of passive and active controls was selected for long-term control of odors exhausting from several areas along the PI. Construction of the final two treatment facilities was completed in the winter of 2015. 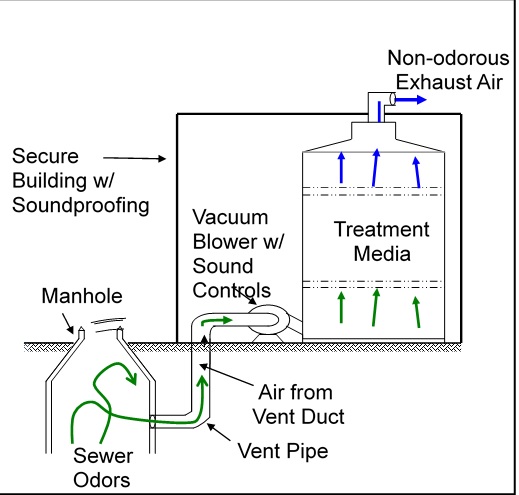 The long-term odor abatement program plan includes a combination of passive and active (forced-air) treatment units for the control and removal of odorous compounds in the exhausting air from the PI. The goal of the long-term odor abatement program is to utilize a combination of active ventilation facilities, sealed vents, and intake-only vents with passive filters to effectively control and mitigate odor problems along a significant portion of the PI.

Factors evaluated for the design of the treatment systems included daily wastewater flow patterns and corresponding flow depths, wastewater rates of speed in various segments of the sewer based on the hydraulic grades, "sewer drag" or wastewater flow friction effects on sewer airspace, and average concentrations of liquid-phase and vapor-phase hydrogen sulfide and other odorous compounds. A primary goal of the design was to determine the airflow rates of speed and the volume of air movement in different parts of the sewer system under ideal (i.e., steady-state) conditions. This analysis required the calculation of wastewater rates of speed for many pipe segments where the pipe slope and/or pipe diameter changes. Areas of the PI where high exhaust rates were noted, public complaints were received, or where significant corrosion was noted provided a basis in determining the preliminary locations of the ventilation facilities.

Based on the evaluation, as well as results from pilot testing, six ventilation facilities have been constructed along the main sections of the PI for the long-term abatement of odors generated by the sewer. The six sites are located in the District of Columbia (Site 1995); Montgomery County, Maryland (Sites 4, 17, and 27); Fairfax County (Site 31), and Loudoun County (Site 46), Virginia. These systems provide odor abatement along the PI while maintaining the adequate transfer of exhausting sewer air and in taking fresh air, which is crucial in prolonging the effective life of the concrete sewer pipes.

Each ventilation facility includes a dedicated building and an odor control system, which is composed of several individual components. Odorous air, containing compounds such as hydrogen sulfide, methyl mercaptan, dimethyl sulfide, and others, is drawn from a collection system manhole. Air enters the collection system through several air inlet/vent structures to replace the air pulled from the manhole by the system fan. The odorous air is contained and conveyed through ductwork and through a mist eliminator to a fiberglass vessel. The odorous air passes through the media contained within the vessel for treatment via adsorption/oxidation, and the treated air is then discharged up and out of the center of the vessel into the atmosphere. 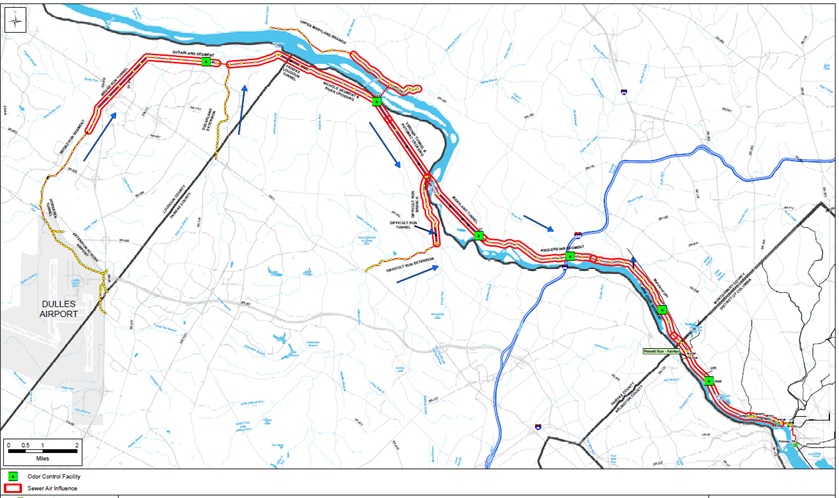