Lead Levels in the District are Historically Low

The U.S. Environmental Protection Agency (EPA) Region III enforces compliance with the Safe Drinking Water Act and implements regulations in the District of Columbia, including the Lead and Copper Rule (LCR). The LCR is a federal drinking water regulation that sets action levels for lead and copper in water. The lead action level is 15 parts per billion (ppb) and the copper action level is 1.3 parts per million (ppm). Action levels are not health standards but are set to limit the amount of metals allowed in drinking water. If the action level is exceeded, DC Water and the U.S. Army Corps of Engineers are required to take specific actions to control corrosion and reduce the occurrence of elevated lead or copper levels.

Under the LCR's standard lead and copper compliance monitoring program, DC Water collects water samples from more than 100 single-family customer homes throughout the District of Columbia in each 6-month monitoring period (Jan-Jun and Jul-Dec). Sampling sites are reviewed by EPA Region III and are randomly selected from households with a lead service pipe. DC Water delivers test kits to these sites with detailed sampling instructions.

The EPA Lead Action Level (15 parts per billion (ppb)) is based on first draw samples. 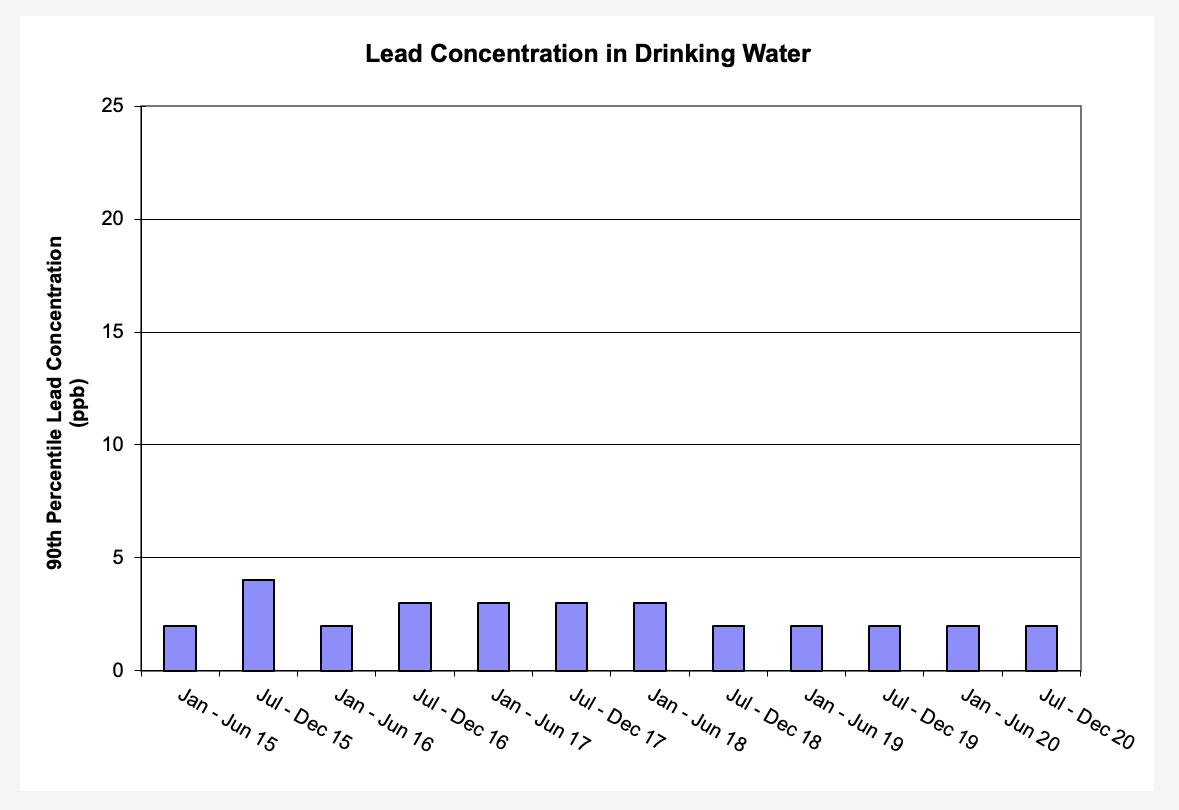 The EPA Lead Action Level (15 parts per billion (ppb)) is based on first draw samples.

*Important: Lead results for an individual home do not represent lead levels in households located on the same block. Lead levels vary from home to home and are dependent on lead sources between the water main and an individual household tap. Pipe materials vary substantially across the District, even among homes located on the same block. If you're interested in testing your drinking water for lead, contact the Drinking Water Division at 202-612-3440 or email leadtest@dcwater.com.

From 1994 to 2001, the District's 90th percentile lead levels were below EPA's lead action level, including in homes with lead service pipes. From June 2002 to December 2004, the District's 90th percentile lead levels exceeded EPA's lead action level - more than ten percent of household samples were above 15 parts per billion. Exceeding the EPA lead action level required action by DC Water and the Washington Aqueduct. These actions included increased water quality monitoring, changes in water treatment to optimize corrosion control, public education and replacing lead service pipes. DC Water worked with corrosion experts, the Washington Aqueduct and EPA to identify and address the cause for the increased lead levels.

Over time, investigations determined that a change in drinking water treatment in late 2000 was the likely cause for increased lead levels. Prior to 2000, the Washington Aqueduct treated drinking water with high levels of chlorine for disinfection and to control bacteria. These high chlorine levels formed a lead scale on the inside of lead service pipes that was insoluble, so lead did not dissolve in water.

In late 2000, the Washington Aqueduct switched from chlorine to chloramine for drinking water disinfection. This switch was necessary to ensure DC Water complied with a separate EPA drinking water standard - the Disinfection Byproduct (DBP) Rule. The DBP Rule is intended to reduce potential cancer, reproductive and developmental health risks from DBPs which form when disinfectants react with naturally occurring material in drinking water. Chlorine is found to form a greater amount of DBPs than chloramine.

The switch in disinfectant from chlorine to chloramine was intended to improve public health protection, reduce the amount of DBPs in drinking water and meet simultaneous federal drinking water standards. The unintended consequence of this switch was a change in water chemistry that affected the lead scales inside the lead service pipes. Lead scales were no longer insoluble and lead began dissolving in water.

In 2004, the Washington Aqueduct began adding orthophosphate for corrosion control treatment and to reduce lead release in water. Orthophosphate is a tasteless, odorless, food-grade additive used to prevent pipe corrosion in the distribution system and in household plumbing. It works by forming a protective coating inside pipes and plumbing fixtures that reduces the amount of lead released in water. The addition of orthophosphate has been effective in reducing lead levels in District households with lead service pipes and other household lead sources.

In 2007, EPA performed an in-depth analysis that would document and determine, to the extent possible, the source(s) and cause(s) of elevated lead levels at DC Water consumers' taps. Click here to read EPA's report, Elevated Lead in D.C. Drinking Water - A Study of Potential Causative Events, Final Summary Report, August 2007.